After deciding to switch over to Slackware current due to a hardware upgrade I thought I’d also start using UEFI. This decision turned out to be interesting and beneficial in some ways.

I will miss LILO

As stated in the Slackware documentation LILO does not support booting from UEFI capable hardware. After many years of using LILO to manage my dual boot system I was quite sad to let it go.

I was however happy to find out that ELILO was available inside the Slackware installation media, so I installed that instead.

As a side note, I was pointed to GRUB2 as this is also available on Slackware however for some odd reason (probably my lack of familiarity with it) I was not able to install it successfully after following the provided documentation. I decided to continue with ELILO as it is perfect for my needs.

During the EFI installer you’re asked if you’d like to install ELILO which is done thanks to the eliloconfig script written by Patrick Volkerding.

I selected the following options and got ELILO installed:

After installing ELILO a new entry was created in the EFI partition of my system, located in /dev/sda1, along with the entries from the secondary OS I installed, however only Slackware would boot since ELILO can’t chainload another boot loader like I was used to with LILO.

I looked at the options suggested by Rod Smith in his post about EFI boot loaders and thought that a boot manager would allow me to continue to use ELILO and keep the dual boot setup that I needed.

I looked at the options provided and decided to give rEFInd a try.

After the installation I simply ran refind-install as root in my terminal and all the boot options were detected automatically. With the installation complete I restarted my system and was able to see the rEFInd menu with some entries available.

I then hid some of the options that appeared on the rEFInd menu by pressing the Delete key while they were highlighted, with that we’re left with our two options: 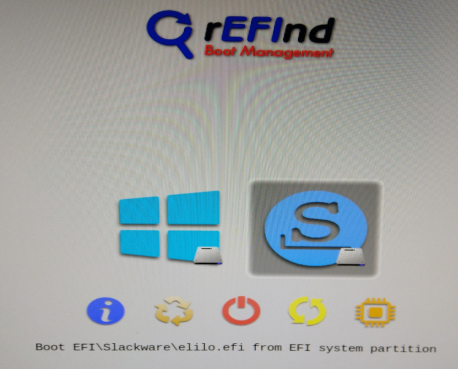 As you may know, for Slackware current there are constant updates to the Linux Kernel. Upon updating from Slackware 14.2 to current, I wanted to start using the generic Kernel instead of huge as well. The process that I now follow on every Kernel update is the following:

Update the system as usual:

If there are kernel updates in the new released packages then you may see something like the following at the end of the update:

Once the updates are complete I run the mkinitrd_command_generator.sh script:

Once executed I got a new initrd.gz file in /boot and I copied to /boot/efi/EFI/Slackware:

I also copied the generic kernel to the same location:

Now I executed the eliloconfig script again, and last but not least I execute the refind-install script one last time:

This will set rEFInd as the default boot manager and will allow us to boot back into the rEFInd menu.

Once we reboot we will come back to the familiar rEFInd menu screen and when we select Slackware we will boot to our newly updated system.